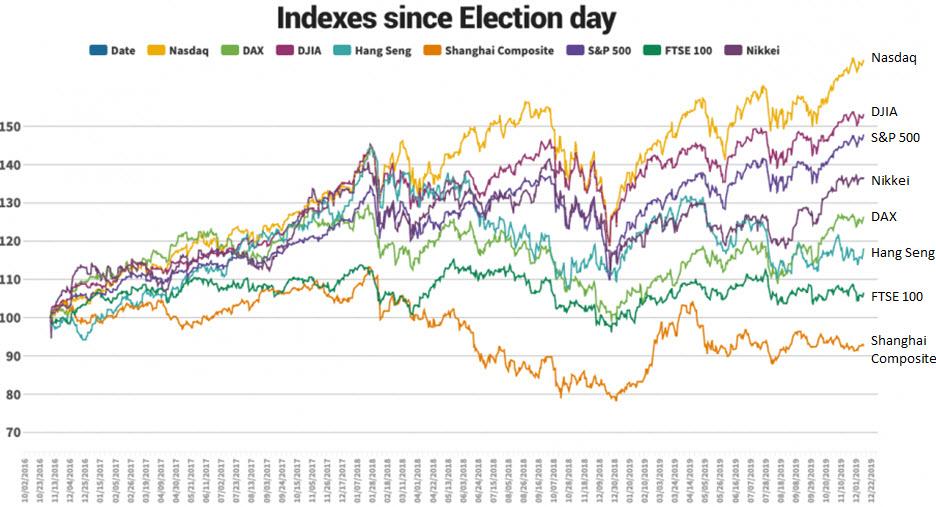 Where is the Economy going?
First, understand how Politics is driving the Economy

It continues to be true:   politics trumps economics.

On December 16th, the Dow was up 10,000 points since Trump was elected  that is a uniquely phenomenal gain of more than 50% in just three years!

Thats not just an unconnected event.   Economic change does not happen in a vacuum.   Politics trumps economics  in other words, politics governs economics; economics is hugely impacted by the political environment in which we find ourselves.

What I said in my earlier analysis, Politics Trumps Economics, is continuing to hold true.

The result is what you see in Americas economy.   Trump is unreservedly a great President  up there with Washington, Adams, Jefferson, Madison, and Lincoln.   Arguably, as a President, Trump is up there with just Washington and Lincoln  as uniquely great as Adams, Jefferson, and Madison are, their remarkable accomplishments were before, not during, their Presidencies.

What is the economy?   Who is the economy?   Economics is just the composite, statistical sum of the constructive actions each of us individually can afford to take  to build our lives  or, negatively, to try to forestall personal decline.   See what I said about that in my commentary Economic Arteries.

No President has been so consistently and unerringly pro-Freedom  and hence pro-Business  as President Trump.

Trump has never relied on ambiguous, mixed-economy stimulus packages  he has simply removed step-by-step the political impediments that have prevented people from being as productive as they could be.

Fifty-percent growth of the economy in only three years tells you:
1.   How much economic power has been unleashed  freed  by what President Trump has done;
2.   How much the U.S. government suppresses the productivity of the American populace with its current, predominantly-socialist policies.

And this should give you pause  in the rest the worlds countries, the oppressive impact of the governments policies is much worse.   Imagine what the world would be like if every person lived in greater freedom.

That is graphically demonstrated by the chart at the top of this page, showing national trends since the election of President Trump:   all three major U.S. stock indices far outstrip the world's other stock indices.   Note that China's stock index has been in decline over that period.   Politics trumps economics - in every nation - reflecting the extant levels of freedom and oppression.   Capitalism works; the others, not so well.

In my new book, From Savagery to Greatness - Stair-steps to Humanity, I stress the fact that the United States absolutely dominates the worlds economy  even though Europe had a 2,500 year head start, vs. Americas birth mere 235 years of existence, and even though the rest of the world had a head start of tens for thousands of years.   But politics trumps economics, and kings, emperors, dictators, commissars, socialists, etc., are not interested in your well-being.

But in a country where government is designed to protect freedom of the individual, and run by those individuals, the economic results - for each and every individual - are incomparably better.

Remember that when you vote.

Happy investing  especially, while Trump is our President,