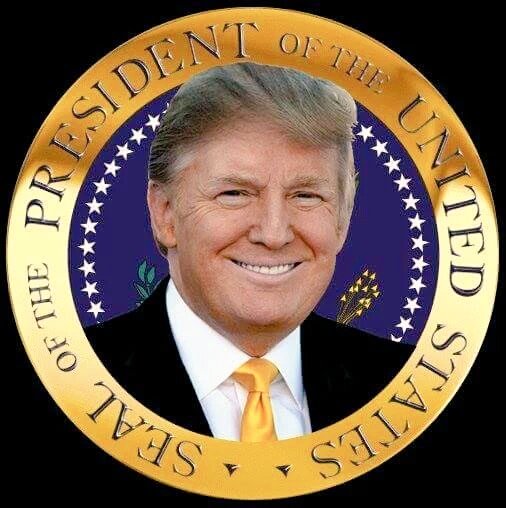 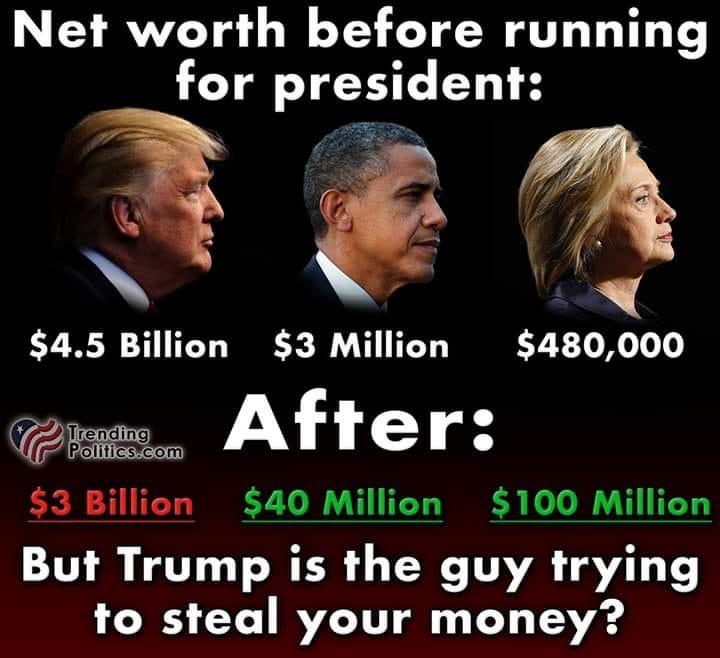 Author unknown; found on the Web ...

Because so many people asked for a document with all of this listed in one place, here it is.  No links provided to remove bias as Google search is easy.  Print this out for family, friends, neighbors, etc.  I encourage you to drop this list off to voters before the 2020 election too!

Trump recently signed 3 bills to benefit Native people.  One gives compensation to the Spokane tribe for loss of their lands in the mid-1900s, one funds Native language programs, and the third gives federal recognition to the Little Shell Tribe of Chippewa Indians in Montana.

Trump finalized the creation of Space Force as our 6th Military branch.

Trump signed a law to make cruelty to animals a federal felony so that animal abusers face tougher consequences.

Violent crime has fallen every year hes been in office after rising during the 2 years before he was elected.

Under Trumps leadership, in 2018 the U.S.  surpassed Russia and Saudi Arabia to become the worlds largest producer of crude oil.

Trump signed a law ending the gag orders on Pharmacists that prevented them from sharing money-saving information.

Trump signed a bill to require airports to provide spaces for breastfeeding Moms.

The 25% lowest-paid Americans enjoyed a 4.5% income boost in November 2019, which outpaces a 2.9% gain in earnings for the country's highest-paid workers.

Low-wage workers are benefiting from higher minimum wages and from corporations that are increasing entry-level pay.

Trump signed the Save our Seas Act which funds $10 million per year to clean tons of plastic & garbage from the ocean.

He signed a bill this year allowing some drug imports from Canada so that prescription prices would go down.

Trump signed an executive order this year that forces all healthcare providers to disclose the cost of their services so that Americans can comparison shop and know how much less providers charge insurance companies.

When signing that bill he said no American should be blindsided by bills for medical services they never agreed to in advance.

Hospitals will now be required to post their standard charges for services, which include the discounted price a hospital is willing to accept.

In the eight years prior to President Trumps inauguration, prescription drug prices increased by an average of 3.6% per year.  Under Trump, drug prices have seen year-over-year declines in nine of the last ten months, with a 1.1% drop as of the most recent month.

He created a White House VA Hotline to help veterans and principally staffed it with veterans and direct family members of veterans.

VA employees are being held accountable for poor performance, with more than 4,000 VA employees removed, demoted, and suspended so far.

Issued an executive order requiring the Secretaries of Defense, Homeland Security, and Veterans Affairs to submit a joint plan to provide veterans access to access to mental health treatment as they transition to civilian life.

Because of a bill signed and championed by Trump, In 2020, most federal employees will see their pay increase by an average of 3.1%  the largest raise in more than 10 years.

Trump signed into a law up to 12 weeks of paid parental leave for millions of federal workers.

Trump administration will provide HIV prevention drugs for free to 200,000 uninsured patients per year for 11 years.

All-time record sales during the 2019 holidays.

Over 90% of those benefitting from the retroactive sentencing reductions in the First Step Act are Black Americans.

The First Step Act provides rehabilitative programs to inmates, helping them successfully rejoin society and not return to crime.

Trump increased funding for Historically Black Colleges and Universities (HBCUs) by more than 14%.

New single-family home sales are up 31.6% in October 2019 compared to just one year ago.

Made HBCUs a priority by creating the position of executive director of the White House Initiative on HBCUs.

The poverty rate fell to a 17-year low of 11.8% under the Trump administration as a result of a jobs-rich environment.

Poverty rates for African-Americans and Hispanic-Americans have reached their lowest levels since the U.S.  began collecting such data.

Consumer confidence & small business confidence is at an all time high.

More Americans are now employed than ever recorded before in our history.

More than 400,000 manufacturing jobs created since his election.

Trump ordered Ric Grenell, his openly gay ambassador to Germany, to lead a global initiative to decriminalize homosexuality across the globe.

In 2018, the Department of Justice (DOJ) dismantled an organization that was the internets leading source of prostitution-related advertisements resulting in sex trafficking.

Trumps Department of Health and Human Services provided funding to support the National Human Trafficking Hotline to identify perpetrators and give victims the help they need.

President Trump has called on Congress to pass school choice legislation so that no child is trapped in a failing school because of his or her zip code.

The President signed funding legislation in September 2018 that increased funding for school choice by $42 million.

The tax cuts signed into law by President Trump promote school choice by allowing families to use 529 college savings plans for elementary and secondary education.

Under his leadership ISIS has lost most of their territory and been largely dismantled.

Signed the first Perkins CTE reauthorization since 2006, authorizing more than $1 billion for states each year to fund vocational and career education programs.

Trump issued an Executive Order prohibiting the U.S.  government from discriminating against Christians or punishing expressions of faith.

Signed an executive order that allows the government to withhold money from college campuses deemed to be anti-Semitic and who fail to combat anti-Semitism.

Trump imposed sanctions on the socialists in Venezuela who have killed their citizens.

Made a deal with the European Union to increase U.S.  energy exports to Europe.

Withdrew the U.S. from the job killing TPP deal.

Secured $250 billion in new trade and investment deals in China and $12 billion in Vietnam.

Okayd up to $12 billion in aid for farmers affected by unfair trade retaliation.

Has had over a dozen US hostages freed, including those Obama could not get freed.

Trump secured Billions that will fund the building of a wall at our southern border.

The Trump Administration is promoting second chance hiring to give former inmates the opportunity to live crime-free lives and find meaningful employment.

Trumps DOJ and the Board Of Prisons launched a new Ready to Work Initiative to help connect employers directly with former prisoners.

8,764 communities across the country have been designated as Opportunity Zones.

Opportunity Zones are expected to spur $100 billion in long-term private capital investment in economically distressed communities across the country.

Companies have brought back over a TRILLION dollars from overseas because of the TCJA bill that Trump signed.

Manufacturing jobs are growing at the fastest rate in more than 30 years.

African-American unemployment is at an all time low.

Hispanic-American unemployment is at an all time low.

Asian-American unemployment is at an all time low.

Womens unemployment rate is at a 65-year low.

Youth unemployment is at a 50-year low.

We have the lowest unemployment rate ever recorded.

The Pledge to Americas Workers has resulted in employers committing to train more than 4 million Americans.

95 percent of U.S. manufacturers are optimistic about the future the highest ever.

As a result of the Republican tax bill, small businesses will have the lowest top marginal tax rate in more than 80 years.

Signed welfare reform requiring able-bodied adults who dont have children to work or look for work if theyre on welfare.

Under Trump, the FDA approved more affordable generic drugs than ever before in history.

Reformed Medicare program to stop hospitals from overcharging low-income seniors on their drugssaving seniors 100s of millions of $$$ this year alone.

Secured $6 billion in new funding to fight the opioid epidemic.

U.S. oil production recently reached all-time high so we are less dependent on oil from the Middle East.

The U.S. is a net natural gas exporter for the first time since 1957.

NATO allies increased their defense spending because of his pressure campaign.

Withdrew the United States from the job-killing Paris Climate Accord in 2017 and that same year the U.S. still led the world by having the largest reduction in Carbon emissions.

Has his circuit court judge nominees being confirmed faster than any other new administration.

Agreed to a new trade deal with Mexico & Canada that will increase jobs here and $$$ coming in.

Reached a breakthrough agreement with the E.U. to increase U.S. exports.

Imposed tariffs on China in response to Chinas forced technology transfer, intellectual property theft, and their chronically abusive trade practices, has agreed to a Part One trade deal with China.

The Tax Cuts and Jobs Act signed into law by Trump doubled the maximum amount of the child tax credit available to parents and lifted the income limits so more people could claim it.

It also created a new tax credit for other dependents.

In 2018, President Trump signed into law a $2.4 billion funding increase for the Child Care and Development Fund, providing a total of $8.1 billion to States to fund child care for low-income families.

In 2019 President Donald Trump signed the Autism Collaboration, Accountability, Research, Education and Support Act (CARES) into law which allocates $1.8 billion in funding over the next five years to help people with autism spectrum disorder and to help their families.

In 2019 President Trump signed into law two funding packages providing nearly $19 million in new funding for Lupus specific research and education programs, as well an additional $41.7 billion in funding for the National Institutes of Health (NIH), the most Lupus funding EVER.

Another upcoming accomplishment to add: In the next week or two Trump will be signing the first major anti-robocall law in decades called the TRACED Act (Telephone Robocall Abuse Criminal Enforcement and Deterrence.) Once its the law, the TRACED Act will extend the period of time the FCC has to catch & punish those who intentionally break telemarketing restrictions.  The bill also requires voice service providers to develop a framework to verify calls are legitimate before they reach your phone.

Trump did all of this while fighting flagrant abuse and impeachment charges.